“That’s what I call a close encounter!”

From travelling through time and space in elaborate wormhole-conjuring alien artefacts in Stargate (1994), to stomping all over New York City in Godzilla (1998) and flooding entire continents in The Day After Tomorrow (2004) and 2012 (2009), it’s fair to say that German-born Hollywood “Disaster King” Roland Emmerich isn’t known for his intimate philosophical character pieces. 1996’s box office phenomenon Independence Day is perhaps the director at his LARGEST and most bombastic – but as iconic, fondly-remembered calling cards go, it’s a doozy.

With belated sequel Resurgence landing in cinemas today (“We had 20 years to prepare…” the tagline duly acknowledges), last night was the prime time for me to reacquaint myself with the original explosive earth vs. extra-terrestrials invasion flick – courtesy of the recently released extras-rammed 2 disc blu-ray re-release by 20th Century Fox.

I say reacquaint because back in the day ID4 (as it is sometimes shortened – although I’ve always been confused by the numeric allocation… July 4th, perhaps?) was a go-to video favourite for this young CR@B. Curiously, I never upgraded to DVD. Therefore I would estimate that I last saw it on VHS in the late 90s, or stumbled across it on TV back in the day when people still eagerly anticipated terrestrial premieres.

I was also intrigued by the blu-ray boast of an “Extended Cut,” for I have never viewed that. So as much as this was a nostalgic popcorn fest for me, it was also bizarrely like watching the film for the first time all over again. At least, it would have been if any of the additional footage jumped out at me as previously unseen, but at no time was I actively aware I was watching inserted scenes until I paused it for loo breaks (the film is a bladder-bursting 2.5 hours long) and the bookmarked time-lapse bar informed me so.

So, did I still enjoy Independence Day, almost a decade and a half after I last watched it? In the words of my generation: FUCK YEAH! From a time before blockbusters had to be dark, gritty and intense to be considered mature, Emmerich and co-writer Dean The Librarians Devlin delivered a light, frothy, overblown whizz-bang extravaganza which entertains throughout. Such consistency is admirable considering it takes over 20 minutes for Will Smith’s cocksure hero, Captain Steven Hiller, to appear on screen and near-on an hour before the alien’s strategically-placed chess pieces execute their checkmate manoeuvre on Earth’s landmarks!

No-one dies a brutal death unless it is a supreme sacrifice for America (not even the dog!) and an inherent optimism and buoyant feeling of patriotic hope is underlined by David Arnold’s rousing score. As Senator (Bill Pullman), soldier (Smith), satellite technician (Jeff Goldblum), stripper (Vivica A. Fox) and sozzled crop duster (Randy Quaid) converge to fight for Earth’s freedom, you are swept along on the ride and end up almost shouting “up yours!” to the invading ET’s as the Star Wars-esque counterattack dog fight reaches its firework crescendo.

While the $75million budgeted blockbuster still looks and feels epic (infiltrating the mothership is a particularly jaw-dropping sequence), the Academy Award-winning 90s special effects have dated in some places (comped explosions; green screen; jerky locust-like alien movements; any computer read-out), but this never detracts from the experience and the barrier-pushing scope is always commendable, even if they aren’t reinventing the wheel with the trope-heavy invasion narrative. 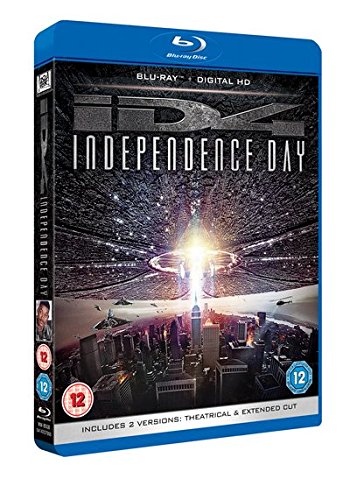 But for all of the large-scale big money shots, Independence Day triumphs most spectacularly in its characterisation. As unsubtle as I earlier branded Emmerich’s ethos, his motley ensemble of Earth’s finest do receive flashes of pathos amongst the flashy destruction (“I haven’t spoken to God since your mother died”; Hiller’s wedding; “If we’d got to her sooner…”), while the banter – particularly between Goldblum and Smith, and anything Brent Spiner’s excitable Dr. Okun utters – is simple but sparky. It will be interesting to see if Resurgence manages to retain this amiable and endearing element in our post-The Dark Knight era of grim grunting, especially with Smith sadly sitting the sequel out.