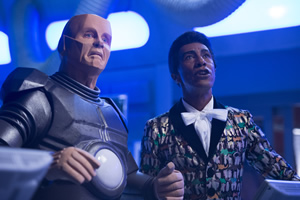 “Smeg happens, you just have to roll with it.”

“I’ve been rolling in smeg all my life!”

While bantering bunkmates Lister (Craig Charles) and Rimmer (Chris Barrie) bicker over a game of Mineopoly, Kryten (Robert Llewellyn) and Cat (Danny John-Jules) bring a drifting escape pod on board for analysis. Intrigued by the craft’s origins, the boys from the Dwarf investigate the SS Samsara’s mothership, which crashed into an ocean moon 3 million years ago. Finding themselves divided into pairs, they must solve the mystery of what wiped out the eviscerated crew before they drive each other insane.

Originally devised as Series XI’s bottle episode to hold over funds for “Twentica”’s exquisite American street set, “Lift Off” – as it was first titled – was to be set in just two elevator sets, before Doug decided to run with the idea and UKTV were fully behind broadening the concept and throwing more money behind what would eventually become “Samsara”. Boy am I pleased they did.

With the episode ordering undecided before recording, it has been widely reported that Doug was eyeing this as XI’s premiere. A glut of character refining callbacks and status-quo defining references mean that this wouldn’t have been out of the realms of possibility: While moaning in his bunk, a “cursed” Rimmer recalls the wiping out of the crew; Lister calls back to fresher’s week at Art College; service mechanoid Kryten lists his favourite types of filth; when concerned he might be blind, Cat’s biggest fear is never being able to see himself in a mirror again. However, “Samsara” lacks “Twentica”’s wow factor; there’s no big bang (or Big Bang Beryl).

That said, what this half hour of sci-fi sitcom lacks in ambition or scale, it more than makes up for in panache. I’m going to go out on a limb here and proclaim “Samsara” the most polished and accomplished episode of Red Dwarf since its V-VI heyday in the early 90s! That isn’t hyperbole, this is legitimately the tightest, sharpest and most perfect marrying of concept, pace, plot and gags of the show’s post-BBC era.

The Mineopoly introduction – which could potentially be dismissed as padding, as so many episodes have opened on unrelated scenes establishing life on ship – is referenced back to thrice and, come the reveal of the SS Samsara’s “flash-heated” mystery, feeds in perfectly to the episode’s theme. It’s masterful, albeit quietly masterful.

Kryten’s discovery of the sunken ship’s Karma Drive (“a piece of Justice World tech”) could be seen as lazy mining of the show’s rich past (V’s “Justice”). The measured slow-burn pace, sombre, oceanic vibe and darker lighting rigs also once again recall “Back to Reality”, while the central conceit of separating and stranding the characters to better get to know what makes them tick is “Marooned” through-and-through.

By breaking up the Dwarfer’s present day investigation with flashbacks to the Samsara’s bustling operational period, the episode could also be compared to the similarly structured “Thanks for the Memory” from Series II. “Status Leak” is also a strong influence here, while Rimmer’s premature introduction to the escape pod’s rescued crewmembers recalls his overzealousness in “Kryten”.

If it sounds like I’m moaning, you’d be mistaken. While some may complain that Doug should be punished for relying on past glories, I think the reversed protocol of the Karma Drive has worked its backwards magic again and rewarded Red Dwarf with absolute comedy gold – it’s no surprise so many scenes from this episode were used in the advertising campaign.

Stronger, more complete and more ingenious than any of the post-VI era, there is precious little to complain about here. I will confess to finding the guest actors playing Green (Dan Tetsell) and Barker (Maggie Service) a little… unactorly in their execution of the illicit science officers, but I’m sure after a couple more viewings I won’t even notice. Likewise, Cat’s history lesson to an increasingly exasperated Lister does feel like it drags on a tad – but that’s the whole point! The fact that he can’t remember Einstein’s name despite (kinda) meeting him a week ago further confirms his denseness, a happy coincidence of the series’ final chronology.

“Twentica” was a big, bold and adventurous romp, a grand opening to Series XI. But after four rewatches I have started to notice a few lines of dialogue which feel maybe a draft shy of pin-point zingers. Episode 2 never has this issue, with Doug’s entire script and the cast’s execution feeling joyfully effortless throughout. With “Samsara”, Red Dwarf XI has LIFT OFF.