Half a century before Bat-fleck, before Bale, before Clooney, before Kilmer and even two decades before Keaton, Adam West donned the iconic pointy-eared cowl for three seasons of light-hearted 1960s crime fighting japery which revelled in the comic potential of this comic book adaptation.

Camp, cheesy and proud of it, Lorenzo Semple Jr’s Saturday morning live action series is that rare pop culture phenomenon: it has simultaneously dated terribly, yet retained its nostalgic charm. There’s surely no-one on this planet who doesn’t instantly recognise Neal Hefti’s theme tune from the first “nah-nah”, or think of Burt Ward’s lyrca-suited Boy Wonder whenever anyone starts a sentence starts with the word “holy”?

To commemorate the 50th anniversary of the series, screenwriters Michael Jelenic, James Tucker and director Rick Morales have resurrected the dynamic duo for a “DC Classic Original Movie” animated sequel, roping in original voice actors West (who is equally popular now for voicing the mayor in Family Guy), Ward and Julie “Catwoman” Newmar to return to their fame-garnering roles. All the other actors have sadly passed away in the intervening years, but their vocal delivery is replicated admirably.

Bright, bubbly and above all genuinely funny, Jelenic and Tucker have nailed the camp, hammy tone perfectly, balancing their production precariously between riffing on the silliness and out-and-out taking the piss. For instance, in one standout scene a dashing Batman and Robin take time out from pursuing their escaping foes to deliver a valuable moral lesson to young viewers about the dangers of jaywalking. Later on, as the tension mounts towards a thrilling climax, the good guys never seem to be in any real danger so long as they have all manner of convenient “Anti-antidote Spray” canisters to hand.

The plot – for what it’s worth – sees the secret superheroes called back into action when a quartet of their most abominable arch-enemies – the Joker (Jeff Bergman), the Penguin (William Salyers), the Riddler (Wally Wingert) and Catwoman – reunite to reign “terror” down on Gotham City once again. They are an insane bunch of cackling clowns who are always more mischievous than nefarious, and when Batman does actually “POW!” them for real (colourful cartoon title cards reliably in place) they seem shocked at his use of actual force.

When Catwoman’s attempt to cast the Dark Knight under her flirty spell fails, she is cast aside by her backstabbing brethren, only for the poison to belatedly take hold, turning Batman against his young yellow-caped sidekick and stealing a Replicator Ray to amass an army of foul-tempered Bat-clones. 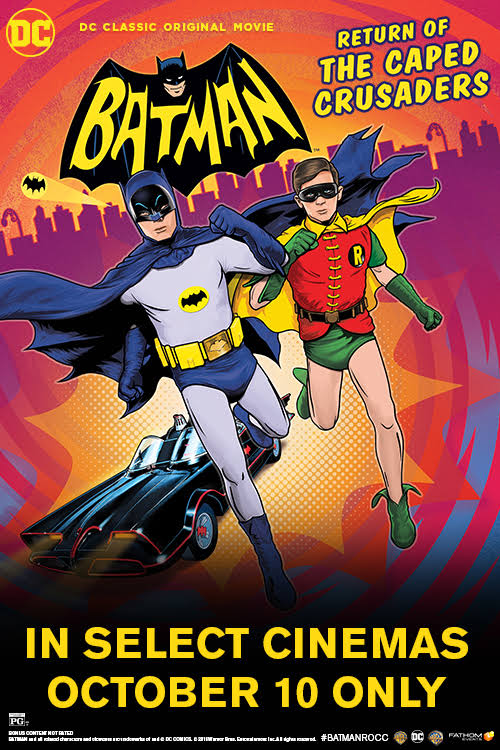 Upping the runtime from the weekly series’ 25 minute slot to a feature length 78 mins, Return of the Caped Crusaders thankfully doesn’t outstay its welcome. It does perhaps eek the plot out one set piece too far, and much more inane madness and bantering buffoonery and it would have become galling, but this is a pacey and playful enough cult curio to keep fans smirking at its tongue-in-cheek self-referential nature throughout. Younger generations, however, may be bemused – none more so than when Batman and Catwoman dance to the theme tune throughout the end credits.