Vicious is too polite a term for the immoral ultra-right wing scumbags who frequent and ‘protect’ Darcy Banker’s (Patrick TMNT Stewart) remote Pacific Northwest dive bar, a tavern where you wouldn’t want to spill another punters drink – much less stumble onto a fatal stabbing.

Sadly for penniless rock band The Ain’t Rights, that is exactly what happens when bassist Pat (tragic Star Trek Beyond star Anton Yelchin) returns to the titular backstage ready room to collect guitarist Sam’s (Alia Cedar Rapids Shawkat) mobile seconds after they have finished their set. Bundled into the locked room alongside witness Amber (Imogen A Long Way Down Poots) and the dead body, Darcy and his burly minions refuse them an exit.

Time ticks by and the police are convinced by a cover story. Tension mounts as the desperate hostages realise they might not leave this venue alive. But can they fight their way to freedom when Darcy calls upon the services of neo-Nazi skinhead gang The Red Laces to make this unfortunate situation disappear, by any means necessary…?

“They’re making it our fault!”

As harrowing, anxiety-inducing and stomach churning as the critical acclaim lead me to believe, there were at least three stand-out moments in Jeremy Blue Ruin Saulnier’s excessively violent thriller which called to mind the heinous realism of 2008’s Eden Lake, a film I haven’t been able to return to since my original viewing 8 years ago. 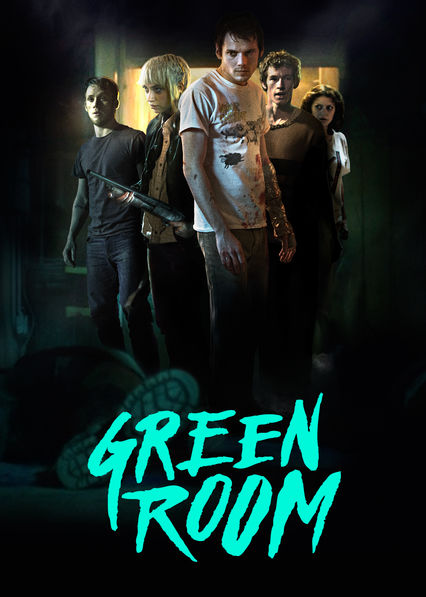 Green Room may slightly stumble in sustaining its high gore quota throughout, and perhaps it peaks too early with its biggest shocks coming halfway through. But even if it does flat line a smidge at the climax (and at one plan-forming stage call to mind the improbable absurdity of Home Alone), this is still top-end genre fare which leaves a blood-stained impression on your subconscious.