STEP INTO THE LIGHT

I have a lot of time for M. Night Shyamalan. While I openly acknowledge that his filmography includes some rotten clangers (The Village, The Happening, The Lady in the Water), I admire his perseverance against the grain; there is no denying he always delivers a surprising and atypical movie experience and it has become all to easy to write off his more uncharacteristic endeavours (After Earth, The Last Airbender) and overlook his immense talents and icon-acquiring success.

2015’s cooky creeper The Visit was proclaimed a lo-fi return to form and it certainly engaged me with its splicing of comedy and chills, so it was encouraging to hear critics laud the Signs auteur’s latest psychological horror, Split, as his best work since his back-to-back The Sixth Sense, Unbreakable heyday of the late nighties, early noughties.

As a renowned purveyor of jaw-dropping twists, I have learnt not to read up too much on Shyamalan’s storylines prior to seeing them play out on the screen and Split unquestionably benefits from a blind-sided audience. In fact, when it opened with teenage pals Claire (Haley Lu Richardson), Marcia (Jessica Sula) and sullen outsider Casey (The Witch’s Anya Taylor-Joy) discussing travel arrangements with their dad-cum-taxi service, I was legitimately beginning to question whether I had walked into the right screen. 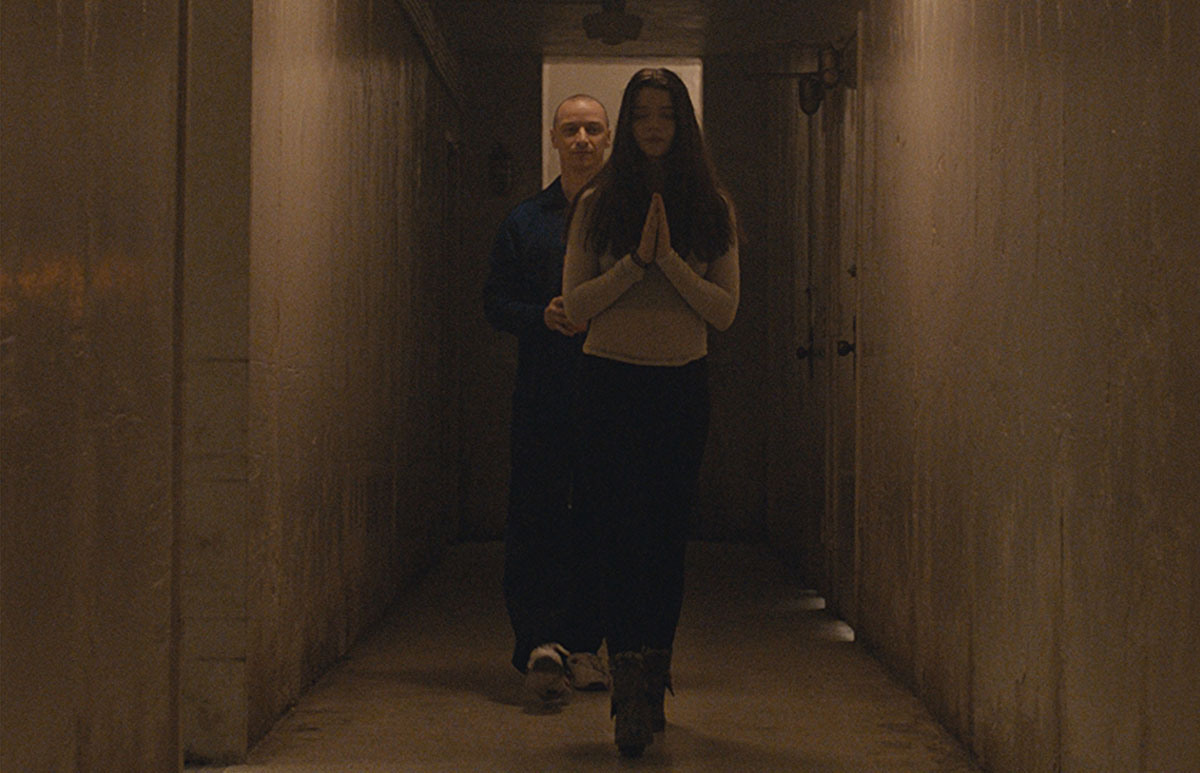 But my fears were allayed at the same time the girls’ was heightened: X-Men star James McAvoy nonchalantly disposes of their dad and silently sits in the driver’s seat, drugging the terrified teens as they look up and begin to question what this stranger is doing in their car. Meet “Dennis”, one of the more sinister of the 23 diverse personalities living inside the body of Dissociative identity disorder-sufferer Kevin Wendell Crumb.

As Kevin’s multiple alter egos vie for “the light,” the girls are kept captive by their unpredictable captor, who could be a lisping nine-year-old desperate to dance to Kanye West, an extrovert fashion designer, a stern school mistress-type middle-aged woman, or more… While Kevin’s psychiatrist, Dr Karen Fletcher (Betty Buckley), is troubled by night-time emails she is receiving from “Barry,” when Kevin arrives at their sessions he always dismisses her concerns and assures her he is stable – but is the dark-minded “Dennis” taking dominance over Kevin’s more moral personalities?

While “Dennis” scuppers resourceful Casey’s increasingly ingenious escape plans, she learns of a worrying possible 24th addition to Kevin’s Horde: “The Beast,” a devilish incarnation with unique and terrifying physical attributes currently submerged in the dark of Kevin’s metaphorical train carriage of egos. Can Dr. Fletcher recognise the danger before “The Beast” steps into the light?

Assured and unpatronisingly directed by a confident filmmaker who utilizes P.O.V. and flashbacks with aplomb, Split is a nerve-shreddingly tense and often uncomfortable psychological horror which never quite swims in the direction of the tide. By choosing Casey as the eyes of the audience rather than Kevin was an inspired choice which put us in the prison with her, allowing a phenomenal McAvoy to excel with a cavalcade of characters.

However, Casey’s shocking and tragic backstory seemed to be hinting at a pay-off which ultimately never came, while the logic-defying twist (because, of course, there has to be a twist!) was too much of a stretch to impress me and does, if you consider it for too long, somewhat undercut and diminish Kevin’s very real and challenging troubles.

Sorry, Shyamalan, but for all the critical praise Split is hording, this beast of a horror-thriller split my opinion and shattered my anticipation, and for that it cannot sit alongside your best in my book. Stick around (unlike one over-eager member of the audience last night) all of a few seconds into the credits for a nifty little tease which puts Marvel’s much-anticipated epilogues to shame.