When their hi-tech underground Headquarters in Virginia is infiltrated and decimated by deadly assailants, escaping NSA Agent Augustus Gibbons (Cell‘s Samuel L. Jackson) sets about repopulating a new unit of deep-cover operatives armed with an arsenal of specialist skills.

Distrusting government officials and with his previous golden boy (presumed) dead, Gibbons goes off-grid and re-recruits an old alley: former Navy Seal Darius Stone (Ice Ride Along 2 Cube). Now a jaded inmate, Stone “doesn’t blend,” but he could be the only man for the job when it transpires that the terrorists are led by a scheming double agent, US Secretary of State General George Deckert (Willem Dafoe), who takes out Gibbons in his plot to overthrow the President (Peter Strauss). 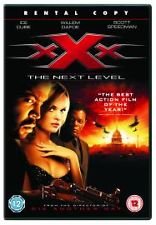 Alas, a tendency for the incoming leading man to resort to race-related banter (“Brother, I was born looking guilty!”) soon became almost as weary as the hip hop-flavoured soundtrack. So, too, the increasingly obvious CGI by Industrial Light and Magic, which began to wobble under the strain of ambition as Tamahori blew everything up from bullet trains to the White House. No wonder it took them over a decade to get this frantic franchise back on its feet…