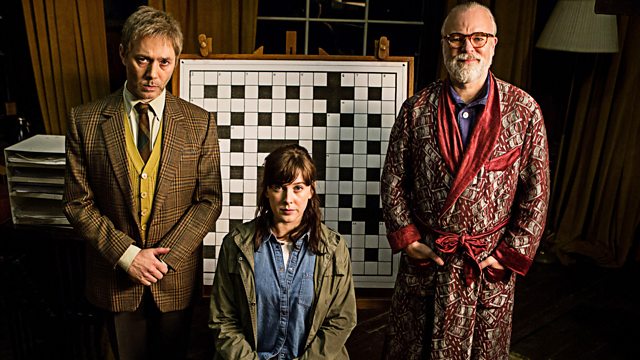 GIVE US A CLUE

Testament to the diversity Inside No. 9’s isolated anthology set-up allows, following last week’s (initially) light-hearted repartee and restaurant kerfuffle, “The Riddle of the Sphinx” presents itself from the off as a more antiquated and traditionally gothic beast, set within the rain-lashed study of Cambridge professor and Varsity crossword-compiler Dr. Nigel Squires (Pemberton), who receives an unexpected visitor in the form of Greggs employee Nina (Alexandra Roach).

Playing dumb, Pygmalion-alike Nina claims to want to impress her college-attending boyfriend with the cryptic clues behind the stuffy lecturer’s dastardly devilish crossword puzzle, but what starts out as a fast-paced lesson in wordplay and academic mischief eventually spirals into a wicked battle of wits which neither pupil nor teacher is in control of. Step in a seemingly cooperative third party (Shearsmith), who has a vengeful reason all his own to want to orchestrate this duplicitous charade.

While “The Bill” was largely a chatty, cordial half hour you felt you could slip in and out of like an actual conversation with mates, “Sphinx” demands your utmost attention throughout. Miss a line, a beat, a reference to a classic text, Egyptian myth or theatrical prop and you’ll have to rewind (or watch again) to follow the ingenuity of the twisted revenge tale which unfolds so quickly yet precisely before your blurry eyes.

Like a fiendishly complex crossword itself, “Sphinx” is masterfully constructed with the requisite twist threatening to dislodge your dinner, but as much as I admire the precision of the intricate plan, I can’t help but feel like it was too smug and clever for its own good. Albeit more straightforward in concept, “The Bill” made for more instantly-gratifying entertainment, while “Sphinx” will haunt your subconscious with its coded layers calling for a Robert Inferno Langdon-esque aptitude to piece together long after the thirty-minute episode has ended. And by that point it’s too late for a happy ending…