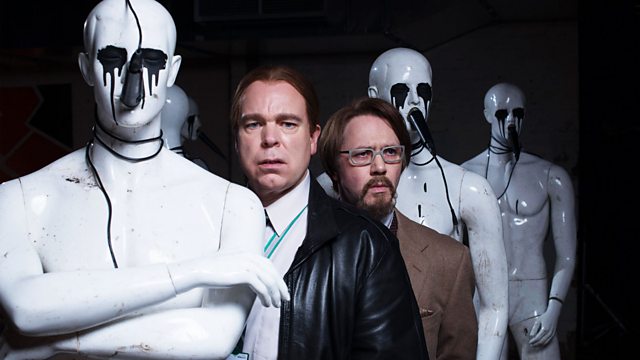 Mastermind all-rounders Pemberton and Shearsmith bring this third batch of their comedy-horror anthology series to a fittingly glamourous close with this witty murder-mystery set in a modern art installation, featuring a remarkable all-star cast. While “Private View” doesn’t quite hit the exceptional highs of deceptively simple post-Christmas special kick-starter “The Bill”, it is the funniest, most audacious and grizzliest story yet.

“This is all a bit Agatha Christie, isn’t it?”

While the diverse guests peruse the immersive works in the gallery’s garish neon glow, the macabre imagery of brain-tumour victim Quinn’s collages reveals itself. “I thought it was a dummy!” Carrie screams when Peter Kay’s corpse slumps forward onto the blood mirror floor. And so the murders continue, with the scared and confused survivors picked off one-by-one in increasingly inspired ways (phone stuffed in mouth, eyes gouged out, suffocation by plastic bag…). “At least I made it to the final five,” bimbo non-celeb Carrie remarks with a wicked tragic irony just before she snuffs it.

Although Inside No. 9’s thirty minute instalments rarely drag, “Private View” zipped along at a thunderous pace to such an extent that I feel it could have benefitted from perhaps a few minutes longer. While the identity of the murderer – previously only represented through P.O.V. shots – is revealed at the mid-way point and the devastatingly twisted reasoning behind the killings is announced James Bond-style while the final victim is tied to a chair, a supplementary twist in the epilogue almost defies reasoning and is never explained, seemingly only carried out so the series could end on a devilish piece of wordplay. It’s a killer line, no doubt, but I would have been more accepting of it if I could have deduced how the narrative jump between final scenes was achieved.