KNOCKING OFF THE RUST

I’m no huge fan of security intelligence or counterterrorism films, but I was interested in seeing action-thriller Unlocked to witness Prometheus and Girl with the Dragon Tattoo (2009) star Noomi Rapace take centre stage again. The original (and best) Lisbeth Salander is joined in this London-set spy game by a stellar cast including Orlando Bloom, Michael Douglas, Toni Collette and John Malkovich. Directed by former Bond-helmer, Michael Apted, surely Unlocked would be a Spooks-tacular adventure?

Then the early reviews started rolling in, and the general consensus was: avoid like the plague. Eek. A quick look on Wikipedia informed me that Peter O’Brien’s script was originally optioned by Warner Bros. SEVEN years ago, set to be directed by Mikael Escape Plan Mikael Håfström. The fact that in the intervening three quarters of a decade the film lost both its original director AND film studio really set alarm bells sounding. But, still… Rapace.

So I sat down the other night in a cinema with just six other patrons to judge Unlocked for myself, aaaand… while it’s far from the worst celluloid atrocity I have sat through in recent years, this CIA terrorist hunt is a hammy and often logic-defying attempt at a serious and tense conspiracy thriller. 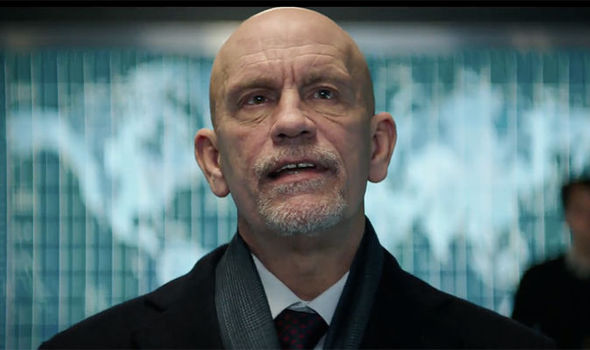 Rapace plays former star interrogator Alice Racine who jettisoned her secret service career for a quiet life in London after failing to “unlock” a prisoner in time to save innocent lives in a Paris attack. However, Alice is called back into action when the CIA apprehend a suspect believed to have direct knowledge of a biological attack.

With a Swede (Rapace), two Americans (Malkovich and Douglas), an Australian (Colette) and – shocker! – an actual Brit (Bloom, cockney-ing it up) playing key roles, the unsubtle attempts at a global, multinational tone just come across as clunky and only confuse an already twisty story. Many a time during the hour-and-a-half duration I forgot we were actually in my home country. The ultimate slap in the face? That American Football is being played at Wembley Stadium!

In a genre typified by red herrings, rug-pulls and supposedly honourable characters hiding sinister agendas, Unlocked freely hands out formulaic tropes to all and sundry. Everyone and their Rottweiler seems to get their own (staged) death sequence, which somewhat diminishes the surprise such a story device should deliver when they spring back to either live to save the day or scupper the victory minutes later.