In my review of survivalist horror The Shallows I commented how the man-versus-shark sub-genre is now at a severe disadvantage, having to come up with a pretty special story to not fall into the shadow of the behemoth Jaws. The same rule can be applied to boxing films where Rocky rules the roost. Perhaps this is why audiences failed to turn out to see Bleed for This is cinemas last November (it failed to recoup its $9million budget), but this Miles Teller-starring biopic is so much more than a second rate “Italian Stallion.”

I openly confess I went in with low expectations. As much as I enjoyed last year’s Sylvester Stallone-starring spin-off Creed as a cheering rag-to-riches underdog story, I cannot stand boxing as a sport. I find it barbaric and find no enjoyment whatsoever in seeing people – however willingly – knocking seven shades of shit out of one another. I gave Bleed for This a chance primarily because Miles War Dogs Teller has impressed me in everything he has been in, from throwaway rom-coms like That Awkward Moment to left-field Oscar stunners like Whiplash.

Once again Teller shines as local Rhode Island boxer Vinny Pazienza, who in the late 80s mounted one of the most surprising and inspiring comebacks in sporting history. At the time of holding the WBA World Light Middleweight Title, the champion they dubbed “The Pazmanian Devil” was involved in a life-threatening, career-ending car accident that left him with a severed spine, bolted into a halo and with the possibility he may never walk again.

Teller’s range is pushed to extremes as Vinny falls from a cocksure bighead who arrives late to weigh-ins because he is having sex, barely even turning his head to see if his girlfriend (Christine Evangelista) is okay when she falls over, to an incapacitated victim imprisoned in his basement with his broken body trapped in a brace. Teller made me feel for Vinny, and I winced every time he caught his cumbersome head-brace and retracted in agony, or was told his life as he knew it was over.

But Vinny refused to believe this, and against doctor’s orders – and behind his stern father’s (Ciarán Hinds) back – just six months after leaving hospital and still in a halo he asks his couch, Kevin Rooney (Aaron Incarnate Eckhart) to secretly start training him again. It beggars belief and makes you question Vinny’s sanity, but however deluded his decision may be, his determination and resolve slowly starts to win you over. 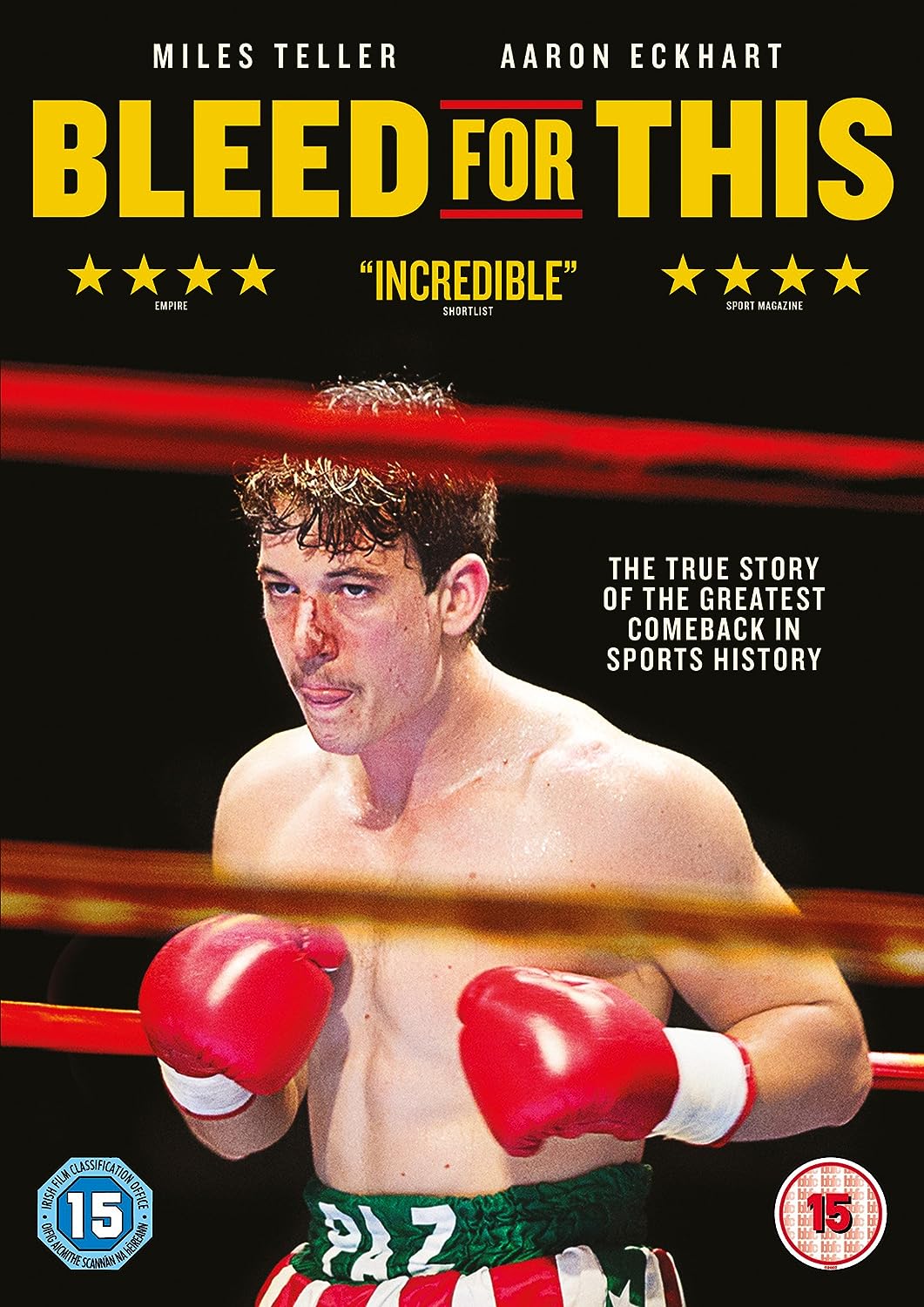 The film’s finale, recreating Vinny’s 1995 comeback fight against Roberto Durán (Edwin Rodríguez), defies the rulebook and could almost be a Rocky script, it is so perfect a fairytale conclusion. Bleed for This floored me – I unfairly predicted the same tired sporting drama formula littered with clichés, but this was so much more. I was blown away by Vinny’s astonishing and miraculous journey and commend Teller’s varied portrayal. Whether you’re boxing barmy or dodge the ring, check this Martin Scorsese-championed true story out.

One thought on “Bleed For This (DVD Review)”