“Mom tells me there is no such thing as monsters. She is wrong.”

Angling as often for heartache as it is for horror, it is not hard to see why writer/director Bryan Bertino’s supernatural indie genre flick is also categorized as a drama. There is an eponymous otherworldly beastie (which looks like a cross between an Alien Xenomorph and Gozer from Ghostbusters), but the title could just as easily be a metaphorical judgement of the diabolical parenting Zoe Kazan’s alcoholic single-mother Kathy provides for her mature-beyond-her-years daughter.

Hitting a fox while driving at night on a deserted back road on the way to drop 10 year old Lizzy (Ella Ballentine) off at her father’s house for the weekend, the caustic duo are stranded in a torrential downpour waiting for a mechanic as time ticks by. When the animal corpse disappears, it soon becomes clear that something dangerous and hungry is lurking in the woodland beyond their car…

It is great to see quirky indie queen Zoe Ruby Sparks Kazan tackling a very different kind of role. There is a pitch black (and sadly relatable) underbelly to the supernatural scares here, and we see more than is comfortable thanks to the insertion of multiple hard-hitting flashbacks to Kathy and Lizzie’s domestic disquietude. I admire The Monster for calling out such rotten behaviour, but once the horror elements begin to dominate, this reverts to a very simple and overwhelmingly melancholic, one-note, lo-fi frightener.

“Get us off this fucking road!” 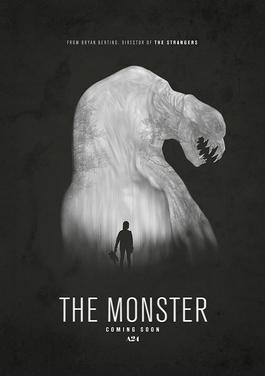 From rustling branches, diversionary flares and limbs raining down on car bonnets, Bertino makes an abundance of none-too-subtle nods, winks and homages to Jurassic Park. This is no bad thing (Spielberg’s dino classic is one of my all time favourites), but when it feels like a film is stretching out the iconic T-Rex paddock attack sequence to an hour and a half, then you start wishing for a bit of variety to enliven the damp and sodden cat and mouse hunt in the dark.

One thought on “The Monster (Film Review)”