I had planned to watch all five of the legitimate Alien films (as in, skipping over Alien v. Predator and its turgid sequel) prior to Alien: Covenant’s theatrical bow on 12th May, however I failed spectacularly, only getting as far as immediate predecessor (and chronological starting point) Prometheus and Ridley Scott’s 1979 original. As it turns out, they were all I technically needed to get the most out of Covenant (which, as my REVIEW details, I enjoyed immensely), however I tardily sustained my franchise re-watch undeterred.

While I haven’t posted blog reviews of Alien or James Cameron’s pluralised 1986 follow-up, they are both outstanding artistic achievements and – while markedly different in tone – both deserving of masterpiece status. For what it’s worth, my preference lies with the franchise kickstarter, which I have watched more times than is healthy, but reacquainting myself with Aliens after a long gap solidified my respect for the marine-heavy action sequel.

David Fincher’s 1992 Alien³ is a much-maligned beast, and while the now-legendary and award-winning filmmaker was young and comparatively inexperienced at the time, the debuting director cannot be held responsible for its flaws. Many screenwriters and directors had failed to bring the xenomorphs back to the big screen before Fincher was even approached to wrangle the wayward, incomplete sequel into what producers 20th Century Fox saw as a satisfactory and releasable state.

A far lengthier 145minute “Assembly Cut” was met with a far more compassionate response in 2003, however this was compiled without Fincher’s involvement. Given my – relative – unfamiliarity with the film (truth be told this may only be my second complete viewing of it), in honour of its 25th anniversary I decided to stick with the original “Theatrical Cut.”

Believing themselves rid of the xenomorph queen at the tail end of Aliens, Ripley (Sigourney Weaver), android Bishop (Lance Henriksen), marine corporal Hicks and colony survivor Newt enter hypersleep aboard the spaceship Sulaco. However, a facehugger stowed away and attached itself to a member of the crew while in cryonic stasis, and when a fire rips through the ship, the oblivious tube-dozing survivors are ejected in an escape pod which crash-lands on Fiorina 161.

Only Ripley survives the impact, and while she waits for a rescue ship she is reluctantly ingratiated into the planet’s sole community: a Weyland-Yutani-owned lead-mining foundry facility and maximum security penal colony populated solely by genetically mutated “double-Y chromosome” inmates; men predisposed to brutal and fiendishly amoral behaviour. When the facehugger attaches itself to an inmate’s dog, Ripley is forced to relive her greatest nightmares for a third time as the resultant chest-bursting quadrupedal alien starts tearing its way through the prisoners.

“It’s fair to say our smooth-running facility has met with some problems.”

With her new scorn scalp, feminist icon Ripley is back to her bad-ass best in Alien³, leading the clueless and anti-social pack of expendable “crud” lifers in a weapon-less battle against the “dragon” in the mine in the “ass end of space”. When analysed, the story is deceptively simple: win over the disbelievers, trap the xenomorph in the furnace and “douse the fucker!” The narrative is complicated by Ripley’s realisation that she infected with an alien embryo, but before she becomes a threat to the inmates, can she use her bond with the enemy to the human’s advantage?

Nicknamed “Fury 161,” the grubby penal colony is aesthetically dominated by dark oranges and burnt brown colourings. The space sequences, establishing shots and interior sets all look fantastically grim, gritty and atmospheric, while an absence of any perceptible xenomorph action for long stretches is balanced by a deluge of blood. Fincher clearly liked to ramp up the horror of this cat and mouse basement hunt, empathising the death scenes with bucket-loads of the red stuff.

A wealth of noticeable names are added to the Alien-verse, including Paul Doctor Who: The Movie McGann, Pete Postlethwaite, Brian Glover and Charles S. Dutton, however it is really only Charles Dance as the facility’s doctor who makes any kind of lasting impact, largely owing to his extended – and intimate! – bond with Ripley and melancholic character arc. Also of note is Henriksen’s fleeting return as a less-than-functioning Bishop, which is as disturbingly grotesque as it is air-punchingly welcome. 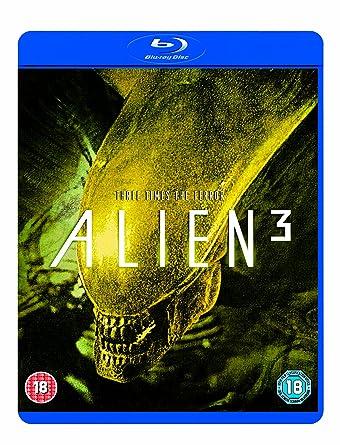 The film’s fiery high-stakes finale is truly spectacular, with Ripley making the ultimate sacrifice in order to keep the embryo growing inside her out of Weyland-Yutani’s capitalist hands. Poignant and tragic, it is Alien³ firing on all cylinders and, had it been the close of the franchise, would have been a fittingly majestic end. The preceding 100-or-so minutes are by no means pitifully bad, but they are not in the same masterful league as the saga’s preceding two instalments. They are serviceable sci-fi fare; dark, nasty, but largely unmemorable. The (thankfully scant) use of primitive early-90s CGI to implement the wonderful practical effects, however, is atrociously obvious in HD.