While the Smurfs-amongst-men set-up which catalysed the 2011 and 2013 Neil Patrick Harris-starring films made them comparable to the on-going Jason Lee-fronted Alvin and the Chipmunks film series, The Lost Village is more akin to Dreamwork’s recent Trolls hit (which I reviewed HERE), with the colour palette and wackiness ramped up to a degree only CGI can accommodate plausibly.

In a community populated by men named after their most overt personality trait (Brains, Hefty, Clumsy), Smurfette (Demi Lovato) is not only the only female, she is also the only Smurf born of clay and shaped by magic. Originally a pawn in evil enemy Gargamel’s (Rainn Wilson) plan to find and destroy the Smurfs, Smurfette has since turned good but is sorely missing a purpose in life.

When the opportunity arises for her to leave Smurf Village and head out on an identity-moulding coming-of-age quest into the Forbidden Forest, Smurfette jumps at the opportunity to follow a mysterious map to track down a secret lost village and warn the inhabitants of the man-sized wizard’s wrath.

Packed full of neon-bright creatures, wild adventures, daring scrapes and good intentions, kids will be transfixed by the kinetic action whizzing before their eyes, while parents can rest easy that it is all pure, goodhearted fun; a $60 million pantomime, if you will. 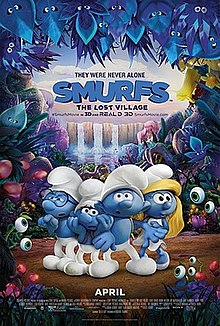 While complementing the theme of self-discovery and personal growth perfectly, the film’s conclusion defies logic and doesn’t make a lick of sense, with the in-universe explanation glossed over with the filmic equivalent of a shoulder shrug. As an adult, this diminished the intended emotional impact dramatically, but when the preceding 85 minutes are witty, zippy, affable and morale-boosting, it feels curmudgeonly of me to berate The Lost Village for one tiny, Smurf-sized misstep.

One thought on “Smurfs: The Lost Village (Cinema Review)”