Stephen Sommer’s late 90s/early 00s trilogy may have upped the Indiana Jones archaeological action instead of concentrating solely on the scare factor, but his CG-heavy blockbusters were great fun (even 2008’s The Tomb of the Dragon Emperor, albeit to a lesser extent) and I was among the contingent who would happily have watched many more adventures with Brendan Fraser’s Rick O’Connell rather than see the papyrus wiped clean and the franchise started afresh.

But while prequel spin-off The Scorpion King has lived on in four (to date) timeline-hopping, cast-swapping straight-to-DVD solo escapades (the latest of which, Quest for Power, I reviewed HERE), Sommers’ Mummy was wrapped up, sealed shut and consigned to ancient history. It took a team of SIX story and script writers (among them Passengers’ Jon Spaihts and Inferno’s David Koepp) to resuscitate the brand for Alex Kurtzman’s contemporary rebirth, and it’s fair to say the initial critical response was decidedly… mixed.

“I think we’ve angered the Gods…”

Perhaps the reactionary lowering of my expectations helped insofar as I had a really good time in the cinema last night! The Mummy 2017 is not perfect by any stretch, but this Tom Cruise-starrer exceeded the brief in delivering requisite quantities of thrills, spills and chills. While I duly noted a lot of attempts at quip-style gags, I must confess the humour rarely landed for me, but the tone was otherwise pitch perfect and I still had fun even if I didn’t find it out-and-out funny. I’ve read multiple reviews claim Kurztman’s film forgets to add any horror to the mix, which is an outrageous fallacy. If anything, it is better at delivering terror than comedy.

Attempting to thieve from insurgents by ordering an airstrike while stationed in Iraq, opportunistic soldiers Nick Morton (Tom Cruise) and Chris Vail (Jake Smurfs: The Lost Village Johnson; one-note) accidentally unearth the tomb of a cursed Egyptian princess. Free from her prison of 5,000 years, the serial-killing Ahmanet (Sofia Star Trek Beyond Boutella) uses all forms of nefarious sorcery – including summoning swarms of camel spiders, ravens and sucking the lifeforce from human victims – to return herself to full power and reunite the two hidden parts of an ancient dagger she requires to fulfil her pact with the god of death, Set, which she failed to complete in life.

With archaeologist Jenny Halsey (Annabelle Wallis) leading the excavation-turned-escape, the plot zips along with an energetic gait, continuing on to old Blighty, via a maleficently-sabotaged plane crash that should have killed everyone on board. The pace only really falters during an exasperating exposition-stuffed time-out two-thirds through, engineered to crowbar in Dr. Henry Jekyll’s (Russell Crowe) evil-hunting underground organisation, Prodigium, which will tie the Dark Universe together.

With Princess Ahmanet incarcerated with evil-inhibiting mercury pumped through her undead veins, the Prodigium tangent feels alien to the rest of the film. With Crowe temporarily promoted from peripheral shadow to sagacious lead player and the story-proper essentially stalled, the scenes drag, even when Jekyll’s hostile, cockney-slurring alter ego gets a moment to flex his right hook. 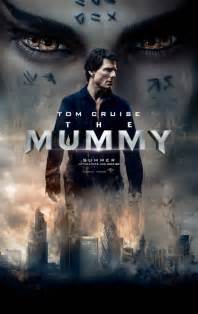 Thankfully (for us, not the characters – or London’s infrastructure), Ahmanet breaks free of her earthly binds to leave a trail of death and destruction in her wake, until Nick makes a surprisingly bold sacrifice to quash her plans to resurrect Set in the body of a mortal man. The finale made for a refreshing twist to the predictable blockbuster formula (“You weren’t expecting that, were you?”), reigniting my Prodigium-dampened enthusiasm for this bold and ballsy reimagining of a horror icon.

3 thoughts on “The Mummy (Cinema Review)”