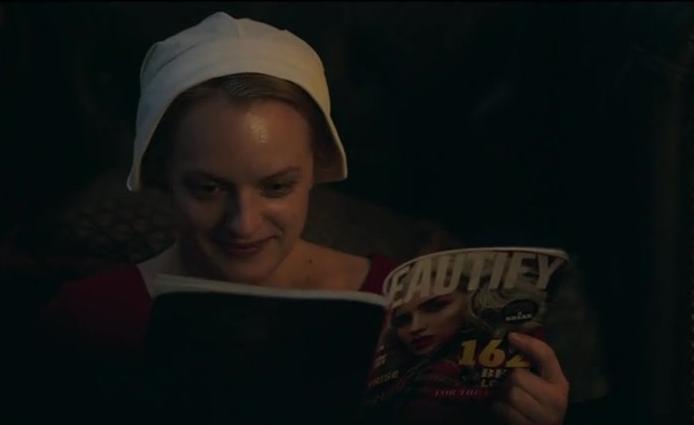 Series created by: Bruce Miller – Based on the novel by: Margaret Atwood

“Every love story is a tragedy, if you wait long enough.”

Offred’s flirtation with the Commander is clearly a meaningless tool she employs to further her lowly standing and garner secrets in the Waterford household, but when Mrs. Waterford (Yvonne Strahovski) desperately proposes they quietly find another male to hurry along Offred’s pregnancy, the elected stand-in makes Offred question her feelings on fidelity in a way she never has before.

The most evocative moments of “Faithful” are the sharp contrasts between Kate and Luke’s rising sexual tension, growing from an innocuous lunch date to an illicit hotel room romp, and the staid awkwardness of Gilead’s bed-rocking. It’s devoid of emotion, passion and intimacy; it’s simply a physical act to complete their “biological destiny” and create children (“What else is there to live for?” The Commander asks).

But Offred refuses to belief that love is nothing more than a “marketing campaign”, and her second, private copulation with Nick (Max Minghella) goes someway to proving there is still room for romance in this oppressive Republic. Even if it does feel like she is cheating on Luke, owing to her reciprocated feelings for the Waterford’s driver.

Meanwhile, “Faithful” contains a trio of shocks which add perspective and texture to this dystopian future: Ofglen (Alexis Bledel) is back following her genital mutilation punishment at the close of “Late” confessing she is too scared to be part of “Mayday” – whatever that may be – before she steals a car and enjoys a brief but liberating joyride. Secondly, a distraught handmaid warns Offred that some of the sex slaves actually like the order and security Gilead offers them, particular if they had been down on their luck and out on the street in the old America. Finally, we see a hint of compassion from one of the trainer Aunts, suggesting they might not all be as callous and autocratic as first believed.