“It cannot truly ever be destroyed…”

Fast-tracked for a Halloween 2014 release after the Warren’s true-but-embellished case files proved popular with audiences, I first saw this $6.5million ‘cheap’-quel on the big screen three years ago. To this day I can vividly recall having to swallow a yelp in reaction to one particular scene where the young ghost of a serial killer whose presence possesses the titular terror-toy runs towards new mum Mia Form (Annabelle The Mummy Wallis), morphing into her older self as a swinging door momentarily obscures her from view.

While I managed to make it through a second viewing without any embarrassing audible shrieks, that scene was still one of a handful within the 90minute film which left me with goosebumps. Annabelle received largely negative critical write-ups, but in my opinion it is a thoroughly creepy horror vehicle which may not be all that original (Child’s Play and Rosemary’s Baby spring to mind as obvious influences and precursors) but it successful mixes jump scares and a chilling atmosphere in fruitful measure.

I do concede that the need to endow an inanimate, former bit-part player with a backstory does lead to a rather convoluted plot; it isn’t only a possessed doll or the presence of a cult-following serial killer that does the haunting, but also the conjured ram-like demon which uses the dead-eyed doll as a conduit to steal the soul of Mia and John’s (Ward Horton) innocent new-born. But I can forgive a plot pile-up when the scares work this effectively. 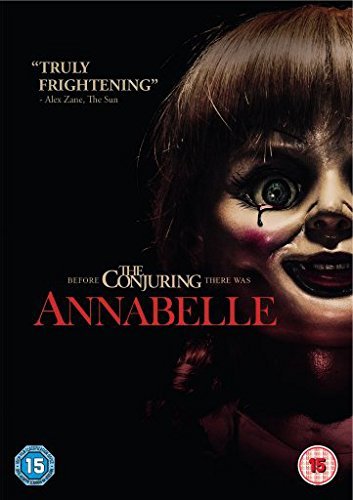 Personally, Annabelle’s biggest vice is how clumsily-included and ultimately wasted Alfre Woodard is. Playing a bookstore worker who lives near to the Form’s new apartment, her character is a peripheral figure who, handily, “believes” in the young family’s paranormal plight. Unfortunately, she doesn’t garner enough screen time or characterisation (despite repeated assertions that she lost a child) to make her conclusive sacrifice all that resonant.