“Welcome to the snake pit!”

“Purgatory fashioned by the hands of men.”

Following Kristen Parker’s (Patricia Arquette) apparent night-time suicide attempt and incarceration in Westin Hospital’s psychiatric ward, the troubled teen meets intern therapist Nancy (a still baby-faced Langenkamp), along with a group of patients who she soon comes to realise are “the last of the Elm Street kids.” The doomed detainees are likewise plagued by disturbing hallucinations brought on by Freddy’s undead vengeance against the parents who burned him alive.

Melting trikes, giant snake-faced antagonists, Claymation marionettes and syringe-fingered gloves prove once again the limitless possibilities the dreamscape set-up affords Craven, co-scribe Bruce Wagner and script rewriters Frank The Mist Darabont and Chuck Russell (who also directed). But as promising as the ingenious “group psychosis” concept is – with Nancy teaching the patients to interact with one another’s dreams – and as spunky as the wicked visuals are, I couldn’t help but feel like part three’s plot peaked too early and the story then spent the remainder of the runtime connecting the dots to reach its conclusion.

“Let’s go kick the motherfucker’s ass all over dreamland!” 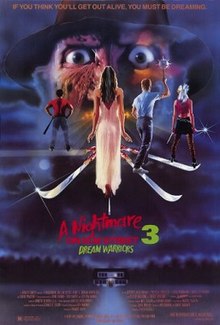 With such a strong and vivid kernel of a story, kooky twists, the addition of illuminating mythology (“the bastard son of a hundred maniacs,”) and some wickedly creepy visuals, Dream Warriors more than justifies its production; there is life in this franchise yet, even if this entry is, ultimately, my least favourite up to this point. Perhaps my hopes were raised too high by the knowledge of Craven’s return? Still, this is by no means a travesty and there’s a long, dark and twisted road ahead for Freddy Krueger yet…