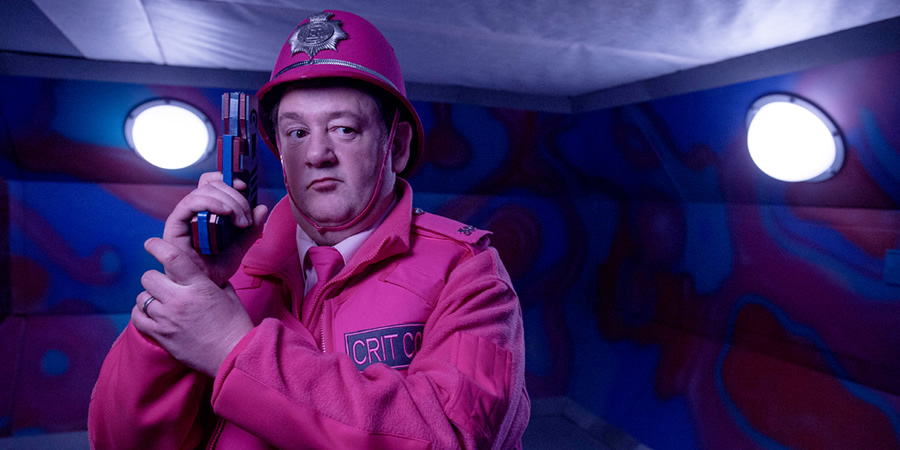 THE TROUBLE WITH ST. TREMBLES

At this halfway juncture I don’t think it’s premature for me to declare Red Dwarf XII an extraordinary run of the popular British sci-fi sitcom. In three episodes we have had three very diverse and unpredictably inventive approaches to the formula. “Cured” was a confident mystery with historical guest stars, “Siliconia” a grandiose gem borne out of a gimmick, while this week’s standalone instalment is a blatant satirical swipe at the PC brigade; madness mocking madness.

This really is daring virgin territory for the show and light-years ahead of some arguably play-it-safe set-ups from recent series where past themes have been mined again. “Timewave” sees the Dwarf quartet board a 24th century Earth vessel speeding perilously close to a helium moon they have just christened “Planet Rimmer”. However, the posse’s panicked pleas to avoid hitting the explosive gas-giant fall on daft ears because the crew of the SS Enconium have outlawed criticism, leaving inept people free to express themselves in any way they see fit, without fear of castigation!

So, poorly-drawn art hangs at sloping angles along multi-coloured corridors, while first officer Ziggy wears outrageous fancy dress and walks everywhere like an egg-laying chicken! Meanwhile, pink-uniformed ‘crit cops’ chase down anyone who dares scorn, ridicule… or tut! It’s a fascinatingly madcap conceit and a later scene where Rimmer (Chris Barrie) has his inner critic drained until it forms a cruel, scar-faced, Blofeld-esque doppelganger opens Doug Naylor up to some very astute character building (“My brother Howard’s a bastard!”). Yet, I can’t escape the niggle that the notion is cleverer than the script is funny.

In fact, a scene where Cat (Danny John-Jules) openly insults the “asshole” lieutenant (Johnny Vegas) and his “droopy-ass tittie[d]” wife stretched credulity even for a creature as self-centred and ignorant as Cat. He may not care about people’s feelings, but knowingly ripping them to shreds seems both crude and cruel. Thankfully, the scene is saved by a first rate guest spot by Johnny Vegas, who was hilarious without ever scene-stealing.

I think my main quibble with “Timewave” is that the central premise became so pointed it overtook the story, to the degree that any tension built up by the SS Enconium’s crash course toward “Planet Rimmer” evaporates with a belated audible shrug of dialogue following a last minute change of heart. The title of the episode, also, seems very ill-fitting given how minute a detail the catalytic timewave actually had on the plot – it would be like renaming “Twentica” after the casket of Kronos!