“What a stupid way to spend a Saturday night!”

Exemplary of my desire to go daaaaark in my film choices in the run-up to Halloween, the other night I choose to watch this bargain basement five-year-old haunted house horror from independent schlock masters The Asylum (Sharknado, Transmorphers, Atlantic Rim – need I say more?!) over well-received recent Jessica Chastain political thriller Miss Sloane. Either I was possessed or simply glutton for punishment!

Purportedly based on true events, this after-hours private hour around “America’s most haunted dwelling” (as bestowed by LIFE Magazine) frequently falls foul of the usual trappings of low budget fare: offensively bad acting from a couple of the unknown cast and passable-if-unremarkable computer-aided FX work. But, despite some cringey OTT dialogue (“You’ll hear things that’ll turn your asshole white!”) and some depressingly gratuitous nudity from a cameoing model (“Hot chick, big tits!”), Whaley House is far from the most turgid of The Asylum’s often dubious output.

“Damn ghosts can suck my dick!” 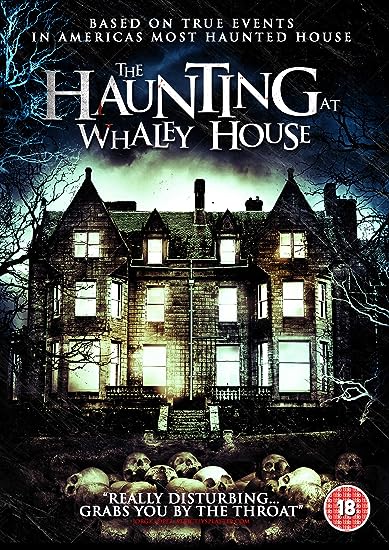 There’s some stomach-churning gore, some goosebump-rising jump scares, a decent possession scene (“Jessica is asleep…”), a ghoulishly inhuman big bad long-teased in off-kilter silhouette (“Died bad, stayed bad,”) and TWO references to MJ’s “Thriller.” Provided you can drown out some atrocious time-filling banter about nipples (seriously!) and you aren’t expecting a revolutionary masterpiece, Whaley House is a tolerably spooky seasonal offering, with a decently downbeat sting in its tail.

One thought on “The Haunting of Whaley House (DVD Review)”