I had been pre-warned by two independent sources that Sideways collaborators Alexander Payne and Jim Taylor’s latest offering did not play out the way the trailers lead you to believe. Leaving the cinema after a screening of the ambitious sci-fi comedy-drama the other evening, it was clear that not everyone got the memo. “It started really well…” one woman opined to her partner before her praise dipped. Another couple agreed giving a capule review that went: “It was fun to begin with and then got really weird.” I really could not disagree with either statement.

Clocking in at a very un-miniature two-hours-and-fifteen-minutes, all of the story beats hinted at in the marketing for Downsizing are covered in the first three quarters of an hour. Matt Damon and Kristen Wiig play a financially-strapped couple in the near-future who are tempted into a visionary reductive procedure which will shrink them (and their debts/assets) to five inches tall, thus reducing their consumption and waste. The problem is that Wigg’s Audrey Safranek gets cold feet and bails at the last minute – after husband Paul (Damon) has already had the irreversible procedure! Thus concludes Wiig’s contribution to the film.

Skipping ahead (as the film does often), we see Paul struggling to adapt to his small, single life in the miniature community of Leisureland. An occupational therapist with former aspirations of becoming a doctor, he is working a dead-end telemarketing job, attempting a loveless relationship with a single mother and has a selfish, vain, party-obsessed goofball (Christoph Waltz) for a neighbour. Life takes a turn, however, when Paul notices that one of his neighbour’s housekeepers is Vietnamese political activist Ngoc Lan Tran (Hong Chau) who previously gained infamy for being jailed and downsized against her will, losing a leg while attempting to be smuggling into the U.S. in a television box.

A few witty lines of dialogue aside, from here on out Downsizing diverges from its sci-fi comedy roots and concentrates on satirically pointing the finger of blame at us for ruining the planet. I admire how it’s anything but predictable, but in moving from its Stepford Wives-esque beginnings to a conclusion beneath the first tiny-community in Norway (via the slums outside Leisureland’s walls), Downsizing feels like two tonally polemic films bolted together. It also doesn’t help that as well as Wiig, a plethora of star names (Jason Sudeikis, James Van Der Beek, Margo Martindale, Neil Patrick Harris, Laura Dern) have little more than cameo roles in the first half, then disappear. 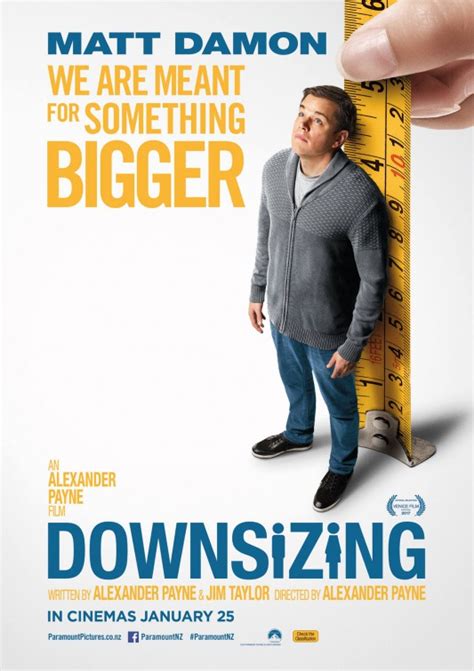 Payne and Taylor clearly have a LOT to say on important human and environmental issues such as global warming, white privilege and liberal guilt, but maybe they tried to juggle too many eco-friendly issues in this one film. Neither half is terrible, they just don’t necessarily co-habitate harmoniously together. Ultimately, Downsizing is admirable and ambitious in scale, but not a giant success.