Disappointingly, while Aardman Anination’s distinctive wide-grinned, large-limbed cartoon style is retained in this prehistoric Stone Age knockabout, the script feels more juvenile than their family-friendly output ever has before. Even the requisite sight gags and witty word play to rope in the sidelined parents feels lazily obvious and simplistic. The grassroots story follows refugee caveman Dug (Redmayne) and his pet piggy Hognob (with grunts courtesy of Park himself) as they infiltrate the Bronze Age City of invading enemy Lord Nooth (Hiddleston) and challenge the boarish usurper to a game of football, with Dug’s rabbit-hunting tribe’s home the trophy up for grabs. 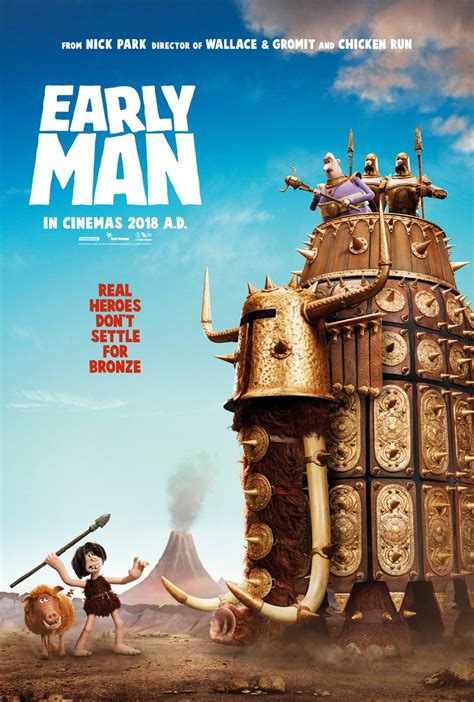 Younger kids will hoot along with the colourful characters and their slapstick capers as they train to master the beautiful game in time for the match of their lives, but adults will raise little more than an occasional smirk at some frankly forced and second rate humour. A prime example is when two Alan Hansen-esque pundits (both voiced by accent adept Brydon) commentate on the action by pointing out EVERY SINGLE JOKE THEY MAKE. If you didn’t laugh aloud at the cave-team being jokily referred to as “Early Man… United,” then you’re unlikely to find it even more funny when it is laboured into the pitch. That said, that particularly joke would have perhaps been a better title for the film itself, as at least then the sport-heavy leanings of the plot wouldn’t come as such a surprise to those uninterested in footie.