Big-name headliner Liv Tyler and budget superstar Scott The Moth Diaries Speedman play an innocent couple whose living space is invaded by a trio of porcelain mask-wearing psychopaths. With no motive or explanation, the chillingly remorseless antagonists terrorise and torture the poor couple for the sake of it (“because you were home”).

With even the “Unseen Extended Cut” weighing in at a feather-light 75mins (before credits), The Strangers is a lean and sadistic thriller which, bizarrely, still seems like a slow-burner! Scenes establishing the status quo that Kristen (Tyler) and James (Speedman) are neither completely happy or technically at ‘home’ (they are staying at a secluded family retreat following a wedding) do a fine job of fleshing out the victims and planting an underlying awkward tension, but once the 4am nightmare begins, it doesn’t contribute any further to the survivalist plot or characterisation. 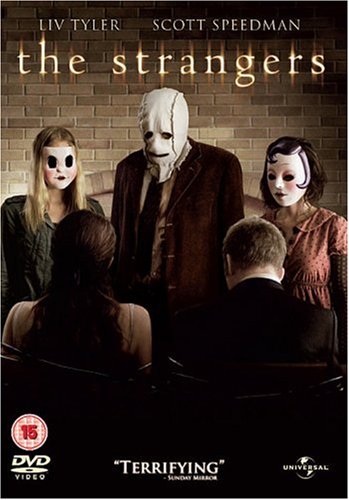 Having seen many a home invasion horror in my time, despite its elevated reputation The Strangers failed to bring much new to the table for me. It’s one USP is that the titular terrorisers remain strangers throughout. Even when they take off their masks the camera never shows their faces or identifies their characters (“She looks like a ghost”). This makes the crime all the more senseless and vicious, but I can’t help thinking it would have lent the plot more weight to tie the protagonist’s strained circumstances (a failed wedding proposal) into the horrific events. It would also have helped bolster the runtime up to the more healthy 90minute mark!