My third review for entertainment podcast website 60 Minutes With went live yesterday, so this is just a heads up and polite nudge to follow THIS DIRECT LINK to read my take on Arrow Video‘s new 2K restoration – and sumptuous double-disc, dual-format release – of Mario Bava’s 1961 swashbuckler Erik the Conqueror.

END_OF_DOCUMENT_TOKEN_TO_BE_REPLACED

Two years after Rainy Dog, Takashi Miike closed out his uneven and indecent Black Society Trilogy with another hard-hitting drama exposing the disreputable underbelly of his home country. Sick of being bullied and treated like outsiders, three optimistic Japanese youths of Chinese decent (among them Kazuki Kitamura, who would go on to star in Hollywood action sequel The Raid 2) move from the countryside to seek their fortune in Tokyo… and end up falling foul of the trigger-happy boss (Naoto Takenaka) of a city crime syndicate.

END_OF_DOCUMENT_TOKEN_TO_BE_REPLACED 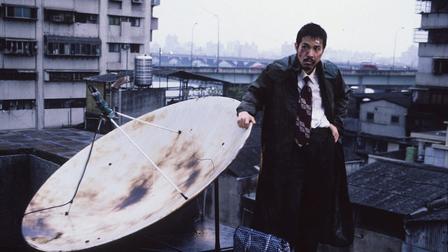 END_OF_DOCUMENT_TOKEN_TO_BE_REPLACED

A miserably ‘atmospheric’ and tediously slow set-off which takes an excruciating 25 unexciting minutes to reveal a Sixth Sense-esque supernatural “twist” which was given away in the first line of the back cover synopsis meant that I didn’t journey beyond half an hour the first time I tried to traverse this gloomy psychological thriller from Australia.

A mystery surrounding the identity of a strange young girl who keeps showing up at his practise leads Peter to question not only his sanity but his memory, too, and one particular date in 1987, for some curious reason… Backtracking (groan) to his quiet rural homestead in the aptly named False Creek, Peter returns to where his retired cop pa (George Shevtsov) is living a lonely existence to see if he can find some answers in his past and exorcise his troubled mind.

Penned and directed by The Book Thief (2014) and Voyage of the Dawn Treader (2010) screenwriter Michael Petroni, I hopped back on board the derailed Backtrack after a couple of days out of service, and I’m extremely glad I did. While the pace never races beyond a gallop, once Peter sets the path to clarity in motion, a truly gripping narrative rises to the fore which links all dangling plot threads effectively and culminates in a horrendously grim – but successfully unpredictable – reveal.

If you can look past the hokey pun of a title, persevere through a mopey, stalling introduction, and don’t consider daylight or dry weather a requisite stipulation in your movies, then when you alight at the end of the line, Backtrack will have rectified its shortcomings and delivering a tense and spine-chilling dark mystery.

Ignoring the maxim “less is more”, this dystopian sci-fi from the director of the more–fondly-remembered Deliverance (1972) and Excalibur (1981) is a trippy and continually baffling amalgam of myriad discordant genre ideas (talking data rings, psychic powers, memory rooms), existentialist theories on life, death, society and religion, sex education (seriously!) and bonkers fancy dress costumes, starring a former 007 as a nappy-wearing Executioner.

John Boorman’s film attempts to justify its incomprehension with lofty literary references (L. Frank Baum, T.S. Eliot, Nietzsche) and elevate its standing with an oft-repeated refrain of Beethoven’s 7th Symphony, but it all just comes off as too clever for its own good. Entertainment really shouldn’t be this difficult to digest.

Much like the film itself (oh, how meta of me), I am going to end my review with quotes from the script to justify my opinion. “It is certainly very fragmented,” someone comments after watching a vidscreen of Zed’s life as a gun-toting Brutal. While as a man lays dying at the film’s busy conclusion, he utters the perfect summation: “It was all a joke!” Pity unimpenetrable cult claptrap Zardoz isn’t a funny one.