I know it’s lazy to deride Michael Bay’s bloated brigade of big ‘bot battle blockbusters, but boy is this fifth Transformers film a rotten piece of shit! I realise that isn’t a very erudite (or polite) way to kickstart a review, but I’m not editing it for two reasons: Firstly, multi-millionaire Bay, producers Paramount and Hasbro Studios won’t care what The CR@Bpendium thinks of their gallizion dollar expanded-universe franchise – people will still turn out in droves. Secondly, given the amount of bad language that litters this light-hearted adapted-from-toys summer sequel, apparently kids are down with the swearz these days, too?! So the shit stays where it is.

END_OF_DOCUMENT_TOKEN_TO_BE_REPLACED

“What did you expect, that they’d come out quoting Macbeth?!”

Arguably, Golden Harvest/New Line Cinema’s fast-tracked return to the sewers finds a better balance between bandits and buffoonery than its schizophrenic predecessor of the year before, ramping up the silliness of the obviously preposterous scenario while toning down the ass kickin’ and dulling the pitiful relatability of the real world elements. The recouped and recovering Foot Clan, for instance, are this time portrayed more in a Power Rangers-esque Putty Patrol mould of faceless drones.

From endless pop culture references (“Wax on, wax off!”) to an intrinsic role for the mutagen-containing contaminated cannisters which brought life to the subterranean slice scoffers, all of the most popular and instantly associated elements of the franchise are back for The Secret of the Ooze. Even arch nemesis Shredder (François Chau) manages to dig himself out of the junk yard following his diving “death” during Teenage Mutant Ninja Turtles‘ rooftop climax!

But there is also much that has changed since the first film, with Paige Turco replacing Judith Hoag as April O’Neil – who now works for Channel 3 rather than 6 – while love/hate romantic counterpart Casey Jones is not even mentioned! Donatello is sounding a lot less like Corey Feldman, too – while the improved animatronic turtle heads courtesy of Jimt Henson’s Creature Shop are more malleable to such an extent that they are almost too expressive. On a sidenote: this film is dedicated to the legendary Muppets puppeteer, who sadly passed away in May 1990.

It’s a huge shame that the opportunity to bring brainless brutes Bebop and Rocksteady to the big screen was scuppered by a difficulty with legal clearances, with wolf Rahzar and snapping turtle Tokka (both voice by Frank Welker) instead being the mutagen-modified monsters a vengeful Shredder forces scientist Jordan Perry (David Warner) to create to fight his enemies in a “freak versus freak” revenge plot.

“Didn’t we see these guys on Wrestlemania?!”

As much as I initially favoured the injection of more comic frivolity, come the climatic showdown I did start to crave a dose of the dramatic. Instances where Shredder contently looks on while his infant-minded creatures are fed poisonous donuts during a fight scene strains credulity. The in-universe incorporation of Vanilla Ice’s “Ninja Rap” theme song into proceedings when the battle spills over into a dance club in which the star is performing is acceptable as a camera-winking cameo, but the scene stretches on waaaay too long – and when Shredder steps onto the stage only to be defeated by loud music, you do start to question whether you’re watching Bill & Ted! 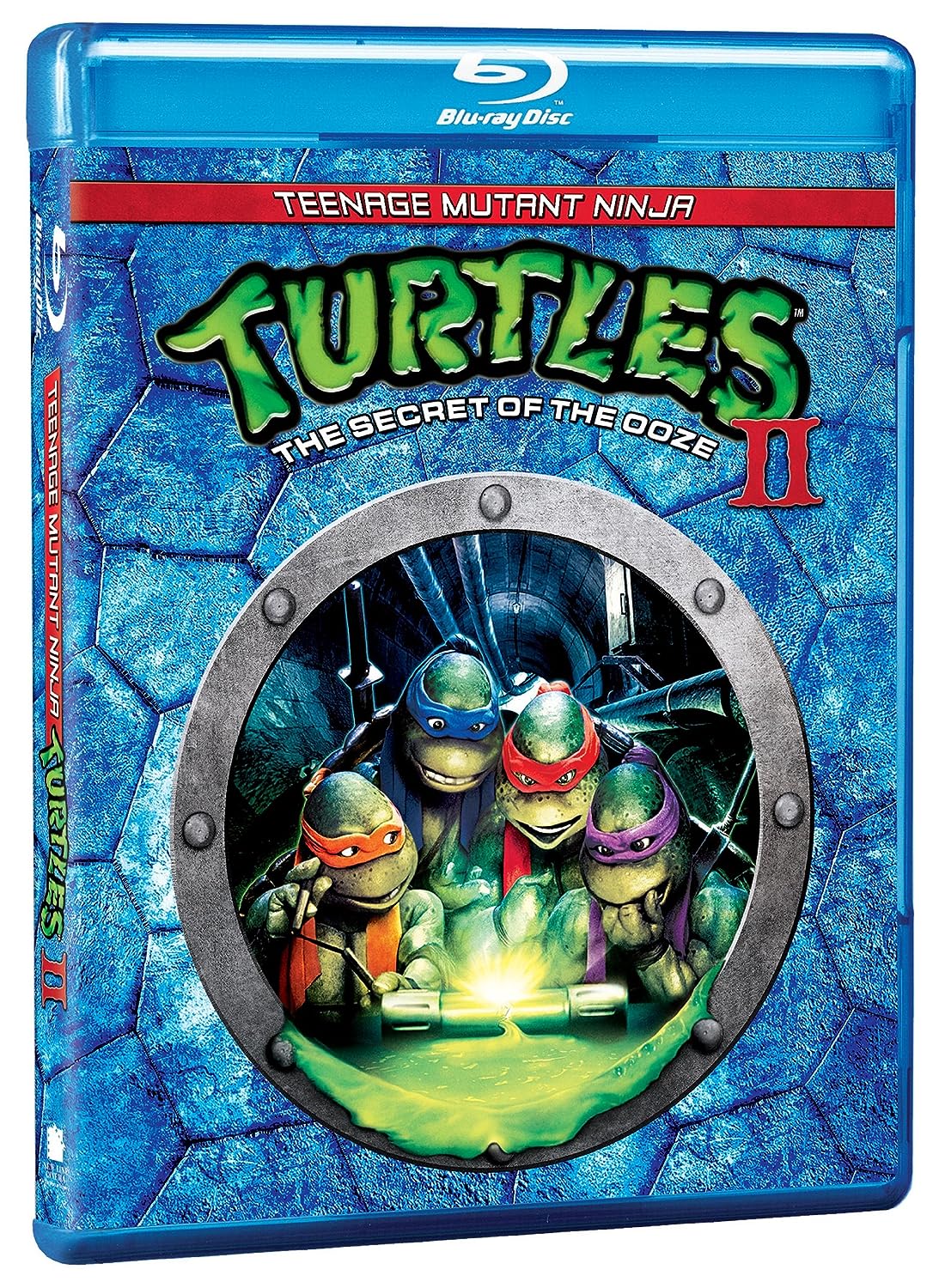 Teenage Mutant Ninja Turtles II: The Secret of the Ooze starts strongly but this bodacious demand-dictated big screen re-tread ultimately falls foul of sequel-itis: more of the same, but BIGGER – which we literally get when Shredder gets a muscle-bulging, armour-enhancing dose of mutagen. As voice-of-reason Splinter (Kevin Clash) remarks with a (realistic) roll of his eyes: “Oy!”