Cole Johnson (Judah Lewis) is bullied for being the only 12-year-old in class to still have a babysitter. But when your babysitter is as smokin’ hot and too cool for school as Bee (Samara Weaving), it can’t be all bad – right?! Under strict instructions from his vacationing parents (Leslie Bibb and Ken Marino) to be in bed by 10:30pm, Cole is persuaded by best friend Melanie (Emily Alyn Lind) to fake sleep in order to see what Bee really gets up to when her pubescent change goes to dreamland…

END_OF_DOCUMENT_TOKEN_TO_BE_REPLACED

TURN OFF THE STARK

END_OF_DOCUMENT_TOKEN_TO_BE_REPLACED

One of the more obscure and less renowned films in the peerless Studio Ghibli collection, up-and-coming director Tomomi Mochizuki’s anime adap. of a popular Japanese novel is also known as I Can Hear the Sea (or Umi Ga Kikoeru, if you’re feeling brave with your pronunciation), but was released as Ocean Waves on its belated region 2 DVD debut release in 2009. Originally made for television by a young crew, it ended up going over budget and schedule.

This extras-lite disc (a trailer is the sole bonus content) is also lacking an English dub, so Japanese with subtitles is the sole audio option. Some may argue that this is how it should always be, but I welcome the option. News that the studio giants are sadly winding down production on new films post-When Marnie was There (released this week on these shores) means revisiting and re-releasing these unsung rarities is surely inevitable going forward.

Despite retaining Ghibli’s distinctive calm and graceful tonal atmosphere, Ocean Waves is unfortunately a slave to its age, with a number of cringingly outmoded sexist comments lending an awkward and naïve air to this story of blossoming young love. Pretty transfer student Rikako (Yoko Sakamoto) moves from Tokyo to the sleepy coastal town of Shikoku and makes waves between competitive best friends Yutaka (Toshihiko Seki) and Taku (Nobuo Tobita) in their last year of high school.

“You’re only acting up because your teacher’s a woman!”

With these two “innocent country lads” lost in wide-eyed, gaping admiration over Rikako’s beauty, they are seemingly blind to her deceptive ways, which often verges on flat-out manipulation and makes “a girl like that” hard to endear to. Nevertheless, this doesn’t excuse the hefty slap an exasperated Taku (the relatable lead character, I should clarify) executes to knock Rikako to the floor. It’s hard to watch and makes Ocean Waves uneasy viewing.

With nearly an hour of the film consumed by Taku’s memories of this fawning and formative time, Mochizuki executes a technique of opening each new reverie with thick white borders of varying sizes accompanied by scene-setting illustrations which are instantly repeated when the story begins. It’s an interesting visual choice (perhaps enforced by budget?), but certainly makes the film stand out – and leaves a better taste in the mouth than the archaic gender politics which are more narrow-minded than charmingly innocent.

With the stunted 72 minute feature fading on the promise of a happy ending, I can’t help thinking Taku and Rikako’s blossoming relationship is in for a rude awakening. After all, “women are only into how guys look, anyway” (!!). For a young director (Mochizuki was just 34 at the time) stretching his creative wings, Ocean Waves is not without promise or value, but its darker, pubescent attitude jars and mars any of the timeless adolescent splendour we usually associate with the Asian anime giants.

“You’re choking worse than Charlie did.”

20 years after a tragic mid-show prop malfunction sees student Charlie Grimille hanged in front of a horrified auditorium of pupils and parents, a Nebraska High School makes the dubiously macabre decision to restage their production of the eponymous theatrical work – complete with “replica playbills!”

After a rambling horror-free opening half hour which achieves little more than establishing some horrendously clichéd jocks and nerds (“You’re a cheerleader who likes to do other girl-dance stuff.” Urgh) excitedly preparing the set and rehearsing their lines, detestable dick videographer Ryan (Ryan Shoos) persuades the nervous leading man – and his best bud – Reese (Reese Mishler) to break into the school the night before curtains up to sabotage the set, thus postponing the play and saving his less-than-competent friend’s blushes.

Roping in Ryan’s girlfriend, Cassidy (Cassidy Gifford), the vandalisation gets off to a routine start, until they run into the goody-goody leading lady – and Reese’s secret crush – Pfeifer (Pfeifer Brown) and things take a turn for the inexplicable. The frightened foursome discover they are trapped in the school with no means of contacting the outside world and in the company of a seemingly vengeful spirit who puts the dram in am-dram…

A multitude of convenient stock contrivances are established so to isolate the terrified teens (unlockable doors suddenly being locked, reliable mobile phones suddenly can’t find a signal, lights go out thus necessitating the use of a nightvision app), while you seriously question why even someone as thoughtless, shortsighted and arrogant as Ryan would so dutifully capture their crime and subsequent supernatural stalking on film – especially on the camera the school provided him!

The region 2 cover blurb boasts The Gallows as a “revolution” of the horror genre, but this is simply another formulaic found-footage compilation of police-confiscated evidence in the vein of Cloverfield, [REC] and – most iconically – The Blair Witch Project. Like the renowned 1999 docu-horror trailblazer, auteur duo Travis Cluff and Chris Lofing’s debut feature also favours psychological tension and the power of what you don’t see, and the film is all the better when that is the case.

Sadly, as the nightmare wears on and the cam gets ever-more shaky, in an effort to up-the-ante they perhaps show a little too much spectral shenanigans. The effectively creepy twist ending would have been masterful if presented as the sole rationale for the madness, but when coupled with the supernatural aspect, it makes for a confusing hodgepodge of elements as if the makers didn’t have complete confidence in the effectiveness of a more believable explanation and feared they needed to give the horror hounds more bang for their buck. 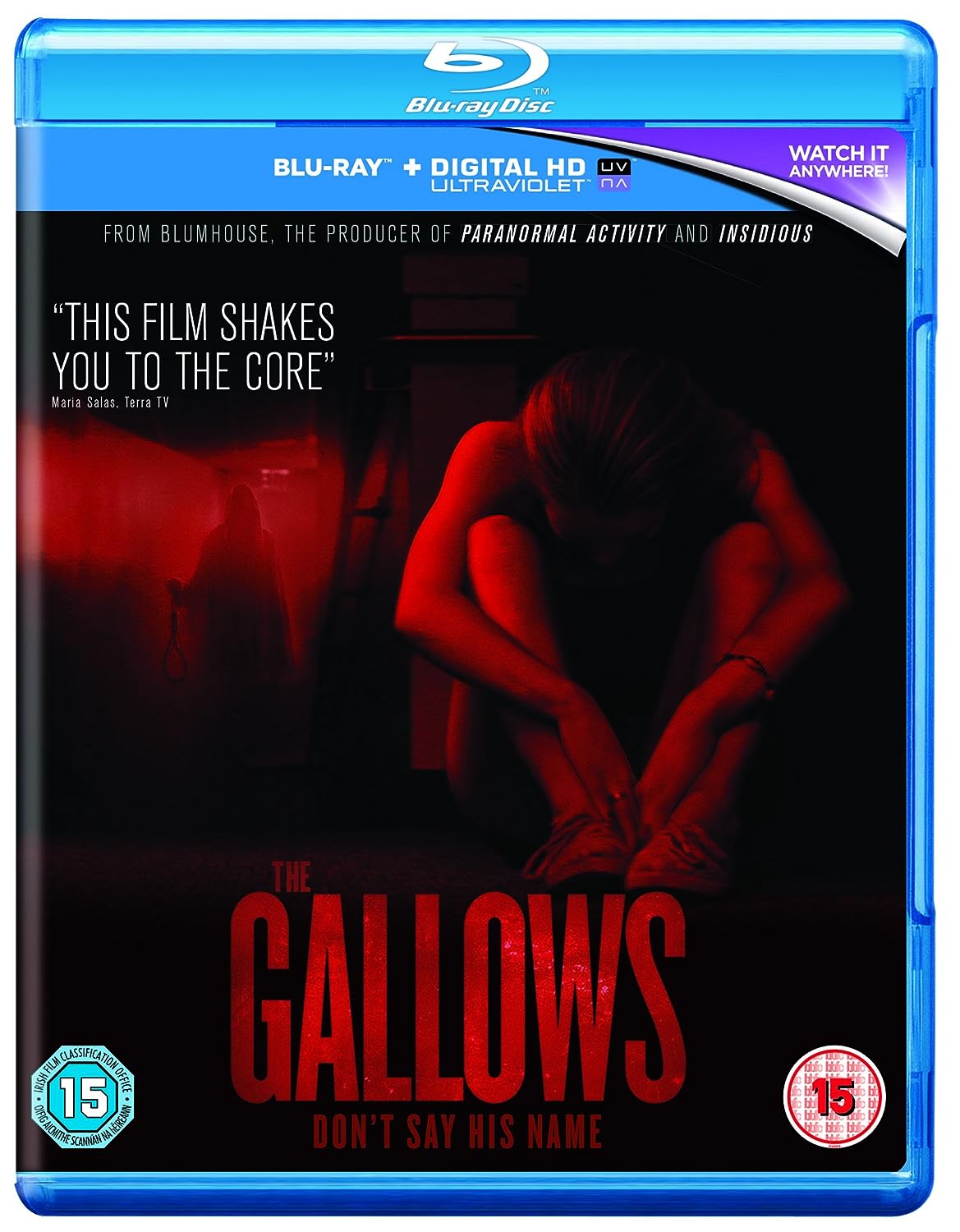 Speaking of bang for your buck, the blu-ray edition comes complete with what is in essence a second feature – The Gallows: Original Version – which is the complete film the indie makers originally shot, guerrilla-style, to tempt Hollywood production companies to invest in their vision. I am extremely interested in checking out how this budget rough cut ‘first draft’ compares to the Blumhouse-backed final product, and will give it a spin when the twists, turns and jump-scares aren’t quite so fresh in my memory.