At the risk of irreparably damaging my geek credentials, I have a confession to make: I don’t really like Blade Runner. I’m sorry. I have tried, trust me, I even own a DVD copy of the 1992 Director’s Cut of Ridley Scott’s cult neo-noir classic set in a futuristic Los Angeles 2019. In recent memory, I have watched it at least three times, but the film draaaags at such an exasperating and dreary pace, and the visuals – for all their atmospheric merit – are marred by dystopian grime. The whole experience feels dirty and dated and it has never engaged me.

END_OF_DOCUMENT_TOKEN_TO_BE_REPLACED

Following the far from unanimous critical response to DC’s universe-kickstarter Batman v Superman: Dawn of Justice in March, the Marvel comic book rivals were arrogantly confident that this anti-hero team-up would return favour to their flimsy filmic franchise. The promotion was typically bombastic and all the signs were promising, and then – on August 1st – the film was finally released…

Much like Suicide Squad’s psychopathic power couple, The Joker (Jared Leto) and Harley Quinn (Margot The Legend of Tarzan Robbie), David Training Day Ayer’s big screen adaptation is deluded into thinking that star names, good looks, colourful clothing and an iPod-shuffle mixtape is enough to get you through. But too much ghoulish make-up, too many tattoos and too many frightful fashion faux pas and you soon realise that these beautiful bad guys, much like this big budget blockbuster, is a schizophrenic, ugly mess.

Following the shocking conclusion to BvS (too spoilerific to reveal), a secret government agency led by intelligence operative Amanda Waller (Viola Davis) believes it has the answer: recruit incarcerated supervillains to undertake black ops missions in exchange for leaner prison sentences – just in time to take down supernatural terrorist The Enchantress (Cara Delevingne), her resurrected brother, Incubus (Alain Chanoine), and a horde of monstrous minions. Surely nothing can go wrong… 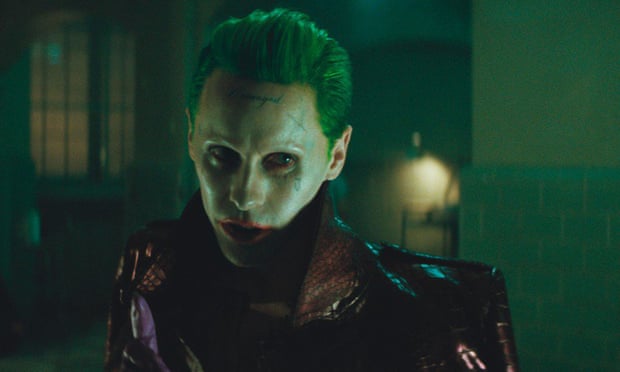 Foregoing any “middle” to the single sentence plot, following the unsettling formation of this anti-Justice League, the film piles straight into an extended end sequence, with the unreliable rebels crossing the besieged Midway City to tackle the supernaturally-empowered witch-goddess – who has possessed the body of Flag’s girlfriend, Dr. June Moone.

There are promising aspects trapped beneath the quagmire (Will Smith is always engaging, while Harley gets the lion’s share of quirky quips), but there is simply too much going on for any of it to be given enough room to breathe. The much-hyped Joker is little more than a bit-part player intent on releasing his missus from her noble responsibilities, Killer Croc perhaps utters all of three gruff lines, while El Diablo lingers in the background for the first two action set-pieces – and these are main characters!

It’s been much-speculated that the film received an eleventh hour re-edit, so it’s hard to ascertain whether this staccato remix of Suicide Squad is David Ayer’s ultimate vision or a too-many-chefs conglomerate of audience-pandering turned sour. Either way, it’s the version we have to judge, and I’m afraid to say that on this evidence I’d be sending this reprobate back to the slammer and throwing away the key. A DC disaster which only makes me appreciate the less-than-perfect BvS more.