For no discernible reason whatsoever this early noughties box office smash is just one I have somehow never gotten around to watching. The recent theatrical release of a belated sequel finally gave me the impetus to check it out, nearly fifteen years after it became a global sleeper hit and clawed its way to the frankly mind-blowing honour of being the highest grossing romantic comedy of all time.

For those of you, like myself, who have lived existences sheltered from its big fat charm, here’s a brief synopsis: Toula Portokalos (Nia Vardalos, who also penned the script) is a buttoned-up 30 year-old still living with her parents and working at their restaurant in Chicago. Single and sick of feeling like a failure because her fervidly patriotic family keep drilling into her the homely ideal of “marrying a Greek boy and making Greek babies,” Toula enlists in computer classes at a local college with the aim of pursuing a life and career away from her intrusive clan.

With her confidence and self-esteem raised (and her glasses ditched in favour of contacts, natch), Toula catches the eye of American school teacher Ian (John Corbett), whom she has long fancied from afar but always been too shy to speak to. The pair hit it off (eventually) and quietly start dating, only for their secret relationship to hit a snag when Toula’s cloyingly conventional father, Gus (Michael Constantine), finds out and stubbornly rejects the idea of his daughter carrying on with (*gasp*) a non-Greek.

What – if anything – can Ian do to bridge the cultural divide and win over Gus’ respect? Will a family-girl like Toula ever be allowed to marry outside her ethnicity? And what will the two diverse families make of each other’s colourfully diverse traditions?

I’ve made a mountain out of it above, but My Big Fat Greek Wedding is noticeably skinny on story – there are no subplots or twists in its ebullient wedding trail. It’s a simple, feel good wide-to-bride journey where the plain and frumpy underdog finds herself and the love of her life and successfully bags a happily ever after (well, unless the sequel throws a major spanner in the works).

Where Vardalos’ script – which tellingly started life as a one-woman play – succeeds is in its endearing amiability. It’s hyperbolic to a circus-like extreme, but it’s obese with hearty charm and stuffed with laugh out loud humour (hearing Ian’s uptight parents being branded “dry as toast” by the livewire Grecians is a highlight) and you really do plump for everygirl Toula. 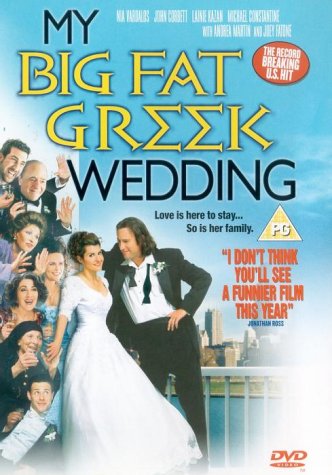 You need to take the glaring national stereotypes with a pinch of άλας (jingoistic Gus, in particular, would be insufferable in real life – outdated in his Old World view and dangerously close to chauvinistic), but if you can look past some broad strokes in the name of farcical hilarity, then My Big Fat Greek Wedding is an easy and delightfully gigglesome pyjama-day watch.